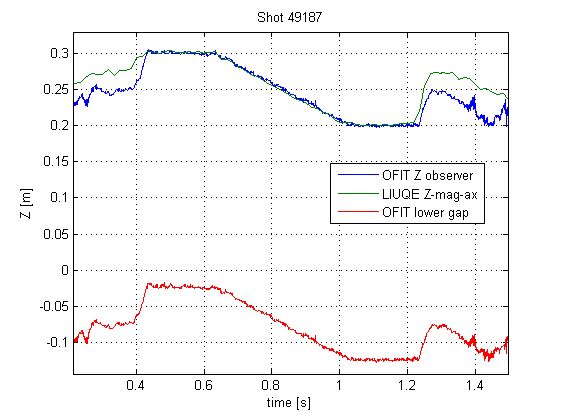 Further to last week’s progress reports, we are now closing in on RT plasma position experiments. Initially, Gillis’ images were distorted during ELM activity. He used a CIII filter, and obtained usable images. The CIII filter was placed on the mid-view camera.

Above, the traces of the OFIT Z-observer and the LIUQE magnetic axis for shot 49187 are shown. In this experiment, a 10cm vertical sweep was programmed. The OFIT Z-observer is based on the ‘OFIT lower gap’ (Z at major radius R=0.9m), with an offset which is defined at the start of flattop, such that it coincides with the LIUQE-magnetic axis.

Gillis (FOM and TU/e), Wymar (TNO) and Bao (the local control-engineer) are now setting-up the simulink-model and will implement this in the control loop. A Z-position control experiment can be run tomorrow on the basis of this shot, where OFIT takes over the Z-measurement at the start of flattop, after the offset is derived from the current Z-signal from the A-matrix (magnetics).